This page introduces the 10k German News Articles Dataset (10kGNAD) german topic classification dataset. The 10kGNAD is based on the One Million Posts Corpus and available under the Creative Commons Attribution-NonCommercial-ShareAlike 4.0 International License. You can download the dataset here.

Why a German dataset?

English text classification datasets are common. Examples are the big AG News, the class-rich 20 Newsgroups and the large-scale DBpedia ontology datasets for topic classification and for example the commonly used IMDb and Yelp datasets for sentiment analysis. Non-english datasets, especially German datasets, are less common. There is a collection of sentiment analysis datasets assembled by the Interest Group on German Sentiment Analysis. To my knowledge the MLDoc contains German documents for classification.

Due to grammatical differences between the English and the German language, a classifier might be effective on a English dataset, but not as effective on a German dataset. The German language has a higher inflection and long compound words are quite common compared to the English language. One would need to evaluate a classifier on multiple German datasets to get a sense of it’s effectiveness.

The 10kGNAD dataset is intended to solve part of this problem as the first german topic classification dataset. It consists of 10273 german language news articles from an austrian online newspaper categorized into nine topics. These articles are a till now unused part of the One Million Posts Corpus.

In the One Million Posts Corpus each article has a topic path. For example Newsroom/Wirtschaft/Wirtschaftpolitik/Finanzmaerkte/Griechenlandkrise. The 10kGNAD uses the second part of the topic path, here Wirtschaft, as class label. The article titles and texts are concatenated into one text and the authors are removed to avoid a keyword like classification on autors frequent in a class.

As in most real-world datasets the class distribution of the 10kGNAD is not balanced. The biggest class Web consists of 1678, while the smallest class Kultur contains only 539 articles. However articles from the Web class have on average the fewest words, while articles from the culture class have the second most words. See below for a detailed overview over the class size. 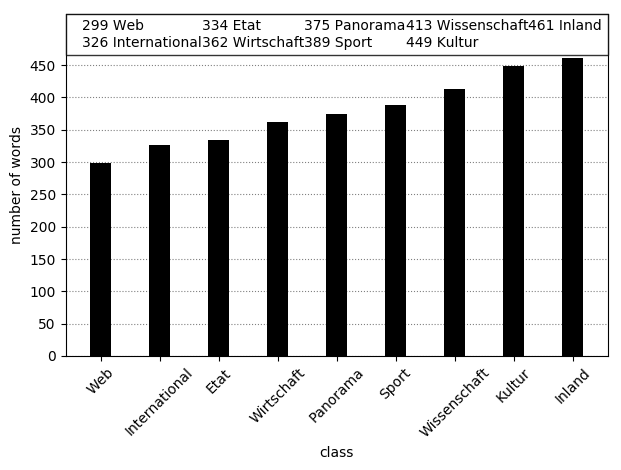 Splitting into train and test

I propose a stratified split of 10% for testing and the remaining articles for training. To use the dataset as a benchmark dataset, please used the train.csv and test.csv files located in the project root. The table below shows an overview of the train-test-split.

This dataset is licensed under a Creative Commons Attribution-NonCommercial-ShareAlike 4.0 International License. Please consider citing the authors of the One Million Post Corpus if you use the dataset.